Today, the “Horizontall” box on HackTheBox retired, which means that publishing write-ups is permitted.

We see two services, a web server on port 80 and a SSH server on 22. A full port scan doesn’t reveal any further information.

So let’s try to see what the web browser reveals. We receive an “unable to connect” error, and a redirect to https://horizontall.htb: 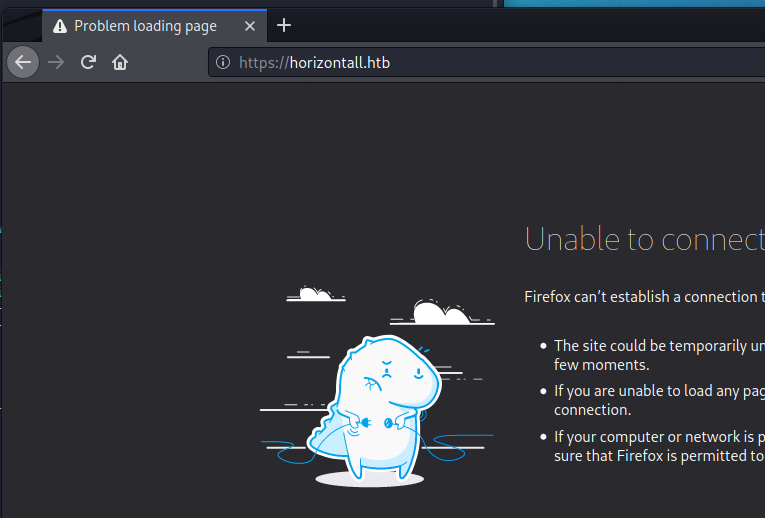 So let’s add a line to the /etc/hosts/ file and try again:

This time we see a page loading when we visit http://horizontall.htb.. 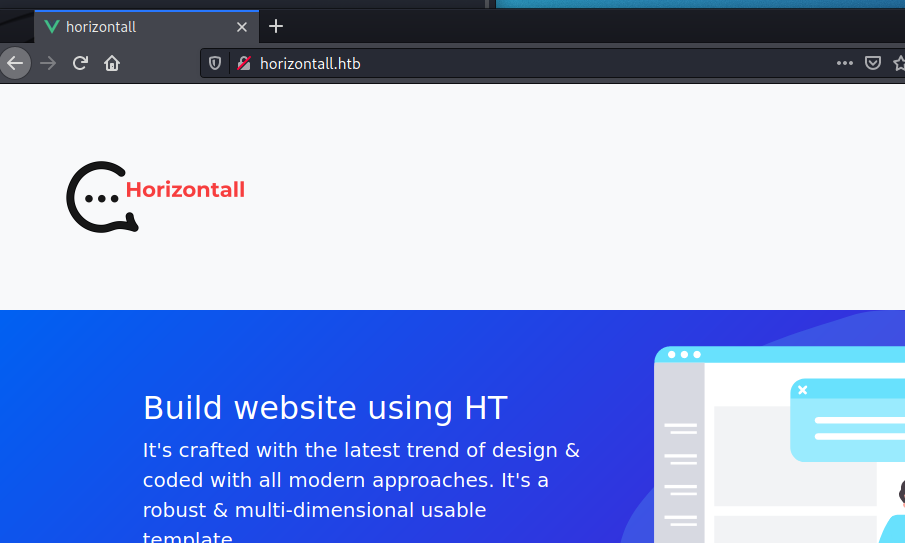 However it seems all links and forms on the form are only front-end dummies, nothing happens when we click them. Gobuster also doesn’t reveal any further directories.

So let’s check the sources in the developer tools. We can see two JavaScript files loading during startup in the Network tabs: 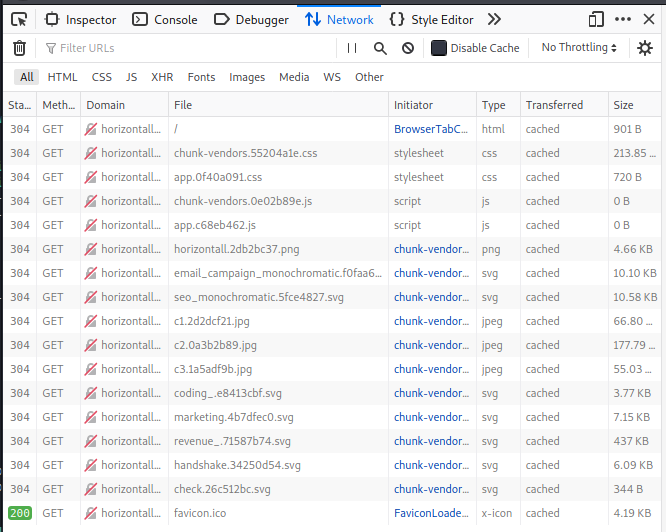 Clicking on the scripts shows the source code. It is slightly obfuscated code, but a quick search for “http” in the code reveals a link to another subdomain:

Let’s add “api-prod.horizontall.htb” to our /etc/hosts file as well, and try to access it.

This time we see a welcome page.

This time the gobuster scan is more successful. We see several subdirectories, including interesting ones like admin/ and users: 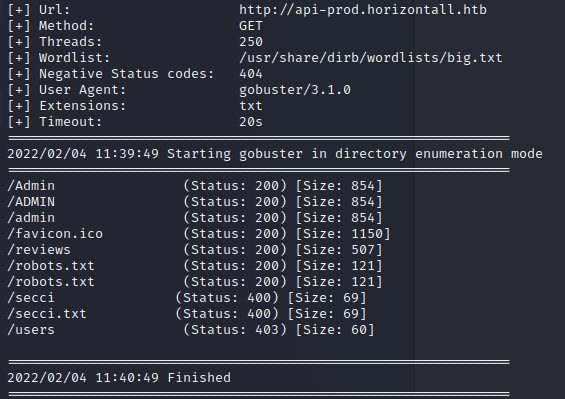 The /admin directory leads to a Strapi authentication form. 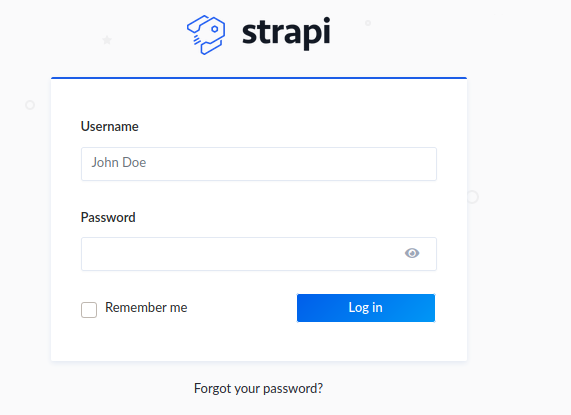 I couldn’t find the Strapi version, so I just did a general search on vulnerabilities for Strapi. Exploit-DB lists Remote Execution Vulnerabilities (unauthenticated):

Checking the code reveals that the script uses the admin/auth/reset-password API to overwrite the administrator password. Let’s download the script1 and run it:

It seems to have worked:

We also receive a kind of shell, but in my case it was too unstable to use. Instead, we can now log in as “admin” user and see what else we can do.

We see an admin panel with the possibility to files and plugin upload. 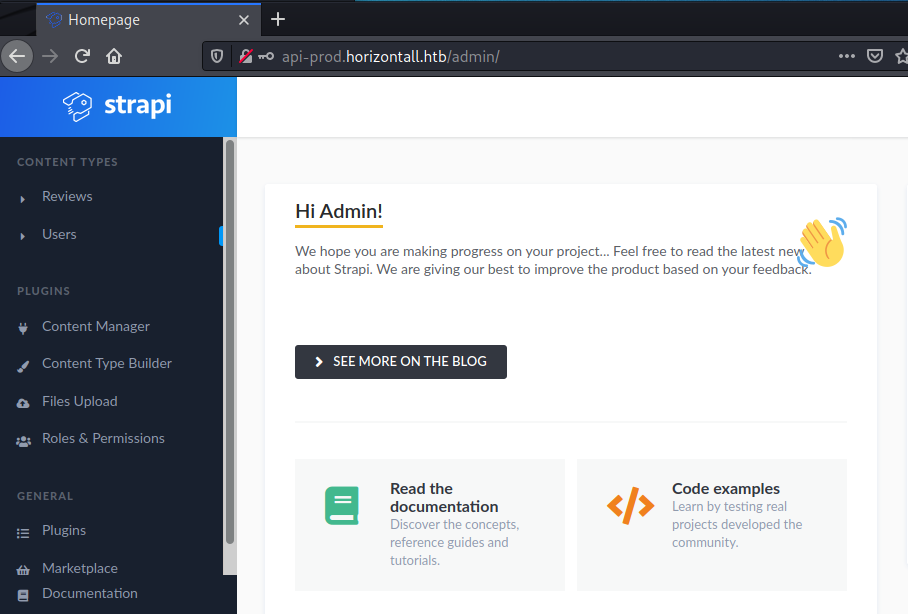 Also we can see now that the Strapi version is v3.0.0-beta.17.4, which means that the (authenticated) RCE from exploit-db could work. Let’s download the code and test it.

The exploit takes the following parameters:

The JWT-Token was received as output of our former exploit. For proof of concept, let’s run the exploit with id as command:

This shell is uploaded in the panel. Clicking on it reveals the path too (the name has changed).

After a little enumeration with our webshell, we find that the uploads get stored in the relative path ./public/uploads/. So, as first step, we make the file executable. In the second step, we create a netcat listener and call it.

After that, we execute it and get a shell as user “strapi”:

With this, we can read the “user” flag in the /home/developer/ folder.

What next? We can enumerate the server, for example with help of LinPeas2, by uploading the script to the server and executing it.

Unfortunately we don’t have the password of the strapi user, which means that many potential attack vectors can’t be used.

However, the section “Active Ports” shows two applications that were not accessible from the outside: (probably) MYSQL running on port 3306, and something else on port 8000.

netstat -natpe shows that the process owner seems to be root:

First of all, let’s create SSH keys in order to be able to do port forwarding.

On our local machine, we create keys with ssh-keygen. Then we can copy the public key to the victim machine:

We can do port forwarding with the ssh -L option:

Now we can visit the Laravel page locally: 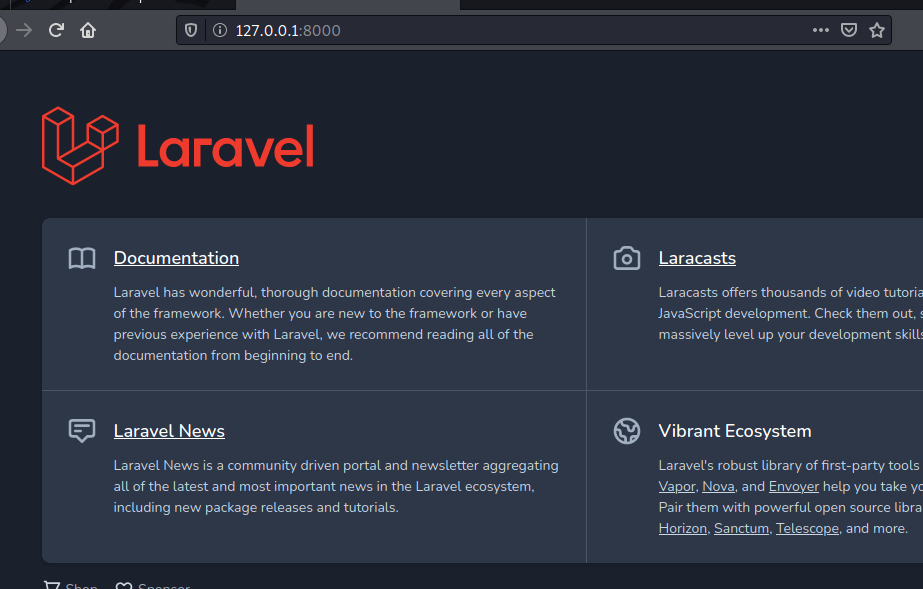 Searching for exploits for this Laravel version reveals CVE-2021-3129 and we can use the following exploit3. It allows unauthenticated remote attackers to execute arbitrary code, if the site is using debug mode.

According to the documentation, these are the codes that we need to run (on our local machine):

From here we could do many things, but since we’re only interested in the flag, we simply pass cat root/root.txt as command and are finished.